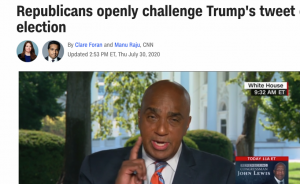 So, let’s get started. Right after I check the news.

Oof, that was a mistake, as always. I do love being “informed”, but that comes with a pretty steep price tag. The weight (and trash) of the world is a lot to take in on a daily basis. On one hand, it feels important. On the other hand, it often feels like a lot of wasted in mental energy. Sure, I can generally talk people in circles on a lot of topical subjects. But, as for making a real difference? I don’t know.

Let’s take a headline for example. We’ll pick on CNN for this one:
“These school districts plan to reopen. Here’s how.”
Pretty alarmist, a bit click bate-ish. They know their audience for sure.

Of course, the big story today was: “Republicans openly challenge Trump’s tweet on delaying election”. So, Trump tweets that it’s considering delaying the election. Something he can’t do, and it wouldn’t be constitutional even if he could. Mike Pompeo punts to AG Barr. Panic.

Weeping and gnashing of teeth. Will they actually do it? At this point, it’s honestly hard to say. Have I been swept up in left-wing hysteria? Well, it’s not without some merit. Time will tell.